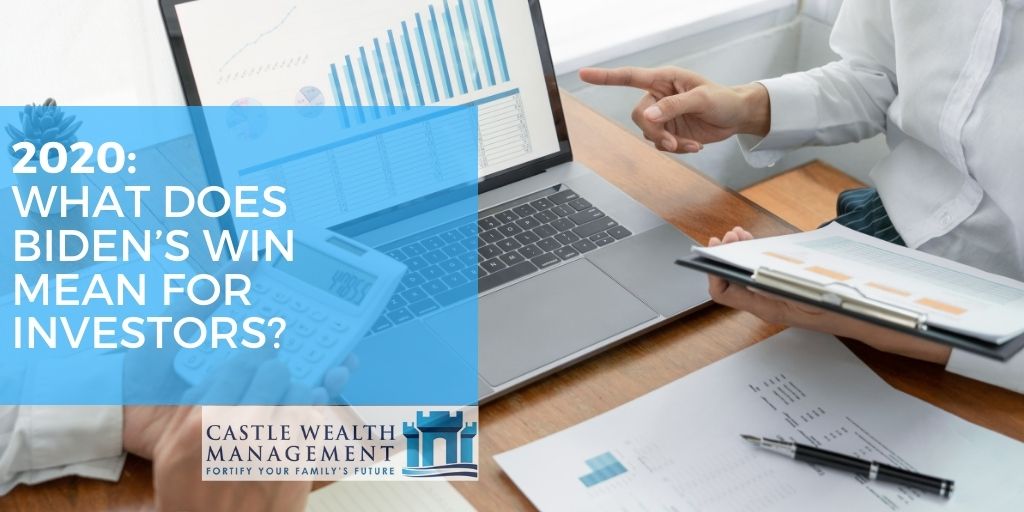 2020: What Does Biden’s Win Mean for Investors?

In the months leading up to the election, there was no shortage of predictions about what would happen if Joe Biden won. Despite that historically the party that wins a presidential election does not matter to the stock market.

Ruchir Sharma, the chief global strategist for Morgan Stanley, wrote a column on the subject for The New York Times. He stated that the stock market “has no clear bias in favor of either party and that market volatility in the run-up to an election is perfectly normal.”

This proved to be true this year despite the fact that it took five days for the results to be determined, and, as of the date of this article, the incumbent continues to challenge the results. If this were the only big news, the market might be exhibiting what we normally see during times of chaos or uncertainty. However, news of successful COVID-19 vaccine trials by Pfizer and Moderna far outweighed election anxiety in the eyes of the stock market.

The 2020 trend has undoubtedly been one to throw a curve in the historical stats. In 2020, we’ve already hit record highs and several lows due to the global pandemic.

Pandemic aside, most investor concerns about Joe Biden’s win are related to his tax plan.

Biden plans to raise the tax rate for top marginal incomes. Top earners would also have a new Social Security tax imposed on them, and fewer deductions would be possible for those making more than $400,000.

Biden also plans to tax investment profits for people who make more than $1 million at the higher income-tax rates of up to 39.6%. This hike in capital gains tax could cause many to sell stocks ahead of the tax increase in order to lock in the lower rate. However, many economists say that it won’t necessarily affect the market as a whole, as shown in 1986 when a tax hike occurred and the market continued to rise. Biden’s tax increase would only apply to a small segment of the market–holdings outside of retirement accounts, pension plans, and foreign investors.

Another aspect of Biden’s tax plan is to lower the estate tax exemption back to its previous level of $5 million (adjusted for inflation annually) before the Tax Cuts and Jobs Act (TCJA) was implemented in 2018. The TCJA temporarily increased the federal gift and estate tax exemption to $10 million from $5 million per person through 2025. In 2026, the law was scheduled to revert back. Biden would revert back sooner.

It is very likely that the U.S. Senate will remain under Republican control (we’ll know for sure after the Georgia run-off election in January), which will make it virtually impossible for Biden’s tax plan to survive in its current state. If any of the plan does make it through the Senate, it will be a shadow of its former self.

The stock market loves when we have a divided government. With the House under Democratic control and the Senate under Republican control, a change in the tax code will be incremental, at most. This creates a more positive investor sentiment since people will be less uneasy about drastic changes.

To be clear, the stock market is not the economy. This has never been more apparent than in 2020 as we’ve watched the market climb more than 50% from its March lows even while unemployment reached 14.7% during the early months of the pandemic.

Nonetheless, the formula for a thriving stock market in the long-term is a strong economy. Biden has indicated that he will create a national plan to fight COVID-19. This, along with a widely distributed vaccine, would get people back to work and allow small businesses to reopen.

If he is able to work with Congress to get another stimulus package passed and/or extend unemployment benefits, certainty in investor sentiment will most likely drive the stock market up.

Timing the Market is Not the Answer

The bottom line is that there are many factors that will come into play with the stock market’s response to Joe Biden’s presidency, and it is impossible to predict how each one will pan out. If we follow historical trends, U.S. stocks and bonds generally perform better during an election year than they do the year after elections.

Yale Hirsch, who authored The Stock Trader’s Almanac in 1968, presented The Presidential Election Cycle Theory. The theory is that no matter who is elected, the stock market is weakest in the year following a U.S. presidential election and then improves in the next three years of their term. The theory’s premise is that the President is busy fulfilling campaign obligations in the first year before taking on economic improvements later on. Hirsch’s theory pans out in some years but not in others, and most certainly does not account for a global pandemic.

All we can really do is study statistics and examine past trends. However, with COVID-19 putting a twist on the ability to analyze similar patterns in our economic history, it can be even more challenging to confidently determine what will occur with the stock market.

There is one thing we know for sure, however, is that successfully timing the market around these momentous events is not a wise investment strategy. It is best to have a portion of your portfolio in fixed income that creates stability while you ride out the volatility in your equity allocation. Because, over time, we know that the stock market will grow.

At Castle Wealth Management, we offer professional financial planning services and investment management to help put your future on the right track. Schedule your consultation today.